Jewelry in India has always been an essential, not just ornamentation. Right from the time of the Indus Valley Civilization, jewelry has been part of an Indian’s ensemble and the fact that for a long time India was a major producer of precious stones and metals such as gold and silver helped to increase the popularity of jewelry in the country. The diversity of India is reflected in the different types of jewelry indigenous to different regions. The techniques to create these beautiful pieces vary just as much as the jewelry itself and can be very detailed. One such type of jewelry that is very popular is Kundan work of Surat and Jaipur . Many people believe that Kundan refers to the precious stones embedded in the gold in this type of ornamentation. Others tend to confuse this with other styles such as polki or jadau . However, neither of these is strictly true. While there may be similarities, Kundan is a unique style in which glass pieces are embedded in gold to create absolute masterpieces. Kundan jewelry is magnificent and gives the wearer a regal air , which is not surprising since royal courts are where this style first emerged. The history of Kundan jewelry making in India dates back several thousand years ago to the Mughal empire and Dynasty period in India, between 1526 and 1858. The craftsman involved in the Kundan jewelry making require a lot of skill and a fine eye for details for mostly the work are quite intricate. The cost of Kundan jewelry varies depending upon the size and work. Price for Kundan jewelry in Delhi (India) starts at two thousand rupees to an upward of around seventy-five thousand. Kundan in silver alloy can be bought for as low as five hundred rupees up to fifteen hundred rupees. Bridal jewelry has always been an important segment of the Kundan jewelry market in India . The colors available in Bridal Kundan sets provide an interesting enhancement to the bride’s outfit. It is also a big hit with the divas of the Indian film industry. From the earings to heavy Kundan sets were worn by most of our famous actresses in Bollywood. Such pieces when seen in our blockbuster movies often arouse the desire to have such pieces but as in pure gold they become expensive. We can easily find relief in our such desire of beautiful intricate Kundan jewelry pieces with the Kundan imitation jewelry present in Delhi (India). 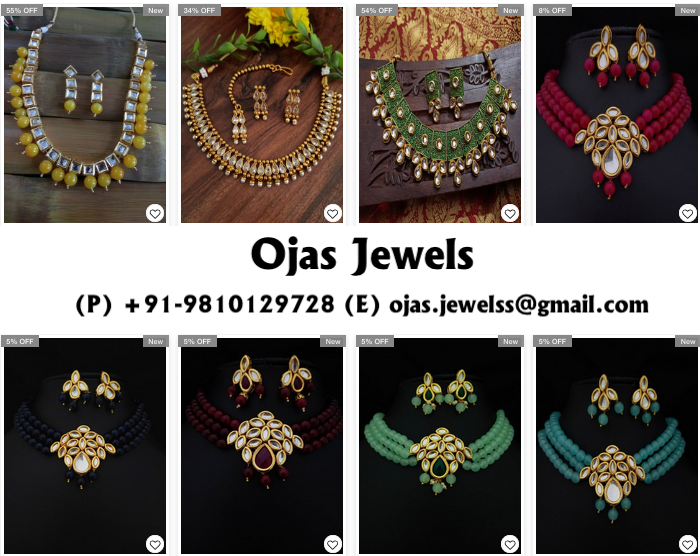 The Kundan necklace is the central point in a Kundan jewelry set and can be crafted in the choker style or a closed collar one . The piece may be heavily encrusted or could be a light one combined with heavier bracelets . Nowadays, there is a preference for lighter pieces that are suitable for party wear and not meant for weddings or similar occasions. A pair of Kundan earrings can be apt for evening-wear without any other accessory. Many jewelry businesses in India are able to provide you with such pieces in affordable price. Jewelers’ like Ojas jewels in New Delhi in India is one such provider with many different jewelry styles from earing to necklaces and rings etc. For every occasion the best of imitation jewelry pieces can be found with them. In the list of most popular and best imitation jewelry online providers Ojas jewels have made their mark in the top. Their continuous latest jewelry updates on their site and social media platforms has gained more popularity day by day, due to their varied varieties from traditional jewelry to office jewelry with most effective price range. The most of Kundal jewelry is made in Rajasthan and Gujrat yet you can find the best Kundan manufacturer in Delhi - Ojas Jewels who also provides their products online with home delivery options available. The best part to Ojas jewes is that you can get any style or design made from them as per your requirements as they are also the best imitation jewelry manufacturers in Delhi (India). If you are looking to state your own business of imitation jewelry Ojas jewels can provide you with wholesale prices with the best and latest designs of jewelry in the market and you can even become as affiliate / channel sales partner with Ojas Jewels. They are known to be the best fashion jewelry manufacturers and Kunda jewelry wholesale suppliers in Delhi - the Northern region of India. To check their latest jewelry designs and products you can visit their website. To know more about the aspects of jewelry check out Kundan Jewelry Online Store @ https://www.ojasjewels.com/

Your shopping cart is empty.
Checkout